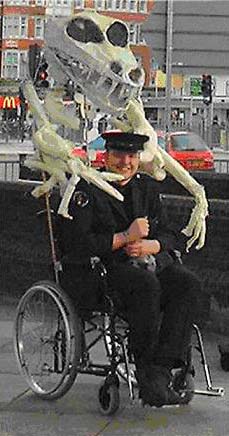 I’m 28 and have completed a degree in Geophysics with the Open University. I’m a wheelchair activist, living in a residential home in Wetherby; I have also been involved in other “alternative” campaigns such as Reclaim the Streets, Earth First! And other groups.

I worked at the Environment Agency as a pollution inspector until 1997 when I went to Leeds University. Ill health/disability have conspired to put a stop to this, but I’m determined to finish the degree, even though I don’t think there will be much in the way of pollution inspector jobs for wheelchair users.

I have done cyberactivism work for Stop Huntingdon Animal Cruelty and came across SES when I went to conference in 2001. Hanging around on First Class I came across the conference and Vivien asked if I would be a moderator, then when Steve left she asked if I would take on the post of Secretary, which I have done despite the fact that I don’t really have much concept of what I’m doing ?

I’m an aspiring vegan but the reality of living in a residential home means I don’t always manage the full hog, so to speak.

I write webpages and work for Leeds University in my spare time; my webpage has been recently updated, it’s at www.kingqueen.org.uk.

Don’t hesitate to drop me an e-mail on Douglas Paulley, Server 2 on First Class.