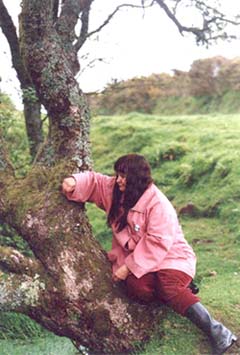 I left school at 16, seeking financial independence, but became frustrated with mundane jobs so started studying with the Open University in 1994. I was appalled to learn about the university's animal experimentation and joined Students for Ethical Science. In 1995 I started to become ill with what turned out to be chronic fatigue syndrome/M.E., and had to take a year out in 1996, but went on to gain a 2.1 BSc (Hons) and Diploma in Natural Sciences with the OU in 2001.

I have now gained a distinction-grade MSc in science, based on three modules in the OU's 'Frontiers in Medical Science' strand. Whilst my initial opposition to animal experiments was ethically based, I have learned that they are also wrong on scientific grounds and with regard to their psychological effect on students.

It is ironic that the OU has, effectively, taught me how to oppose its stance on animal use, and I appreciate this manifestation of democracy in action. It does not cause me any guilt, as I strongly believe that the abandonment of practices which harm non-human animals will benefit not only them but also humans and the environment.

I still have M.E., and accept that my disability may be permanent. Having gained my Masters degree in 2004 I am now using my scientific knowledge and qualifications to carry out unpaid, and sometimes paid, work from home in the field of humane, responsible and rigorous medical science.

For more information, please visit my website at www.vivienpomfrey.co.uk.